Skip to content
Events
The Tashkent Medical Academy takes 1st place in the national ranking among higher medical educational institutions
Announcement
Competition for Master’s Degree at Japanese Universities
The first international course on management of the educational process according to the credit-modular system started in the Tashkent Medical Academy
Speech by the President of the Republic of Uzbekistan H.E. Mr. Shavkat Mirziyoyev at the 75th Session of the United Nations General Assembly 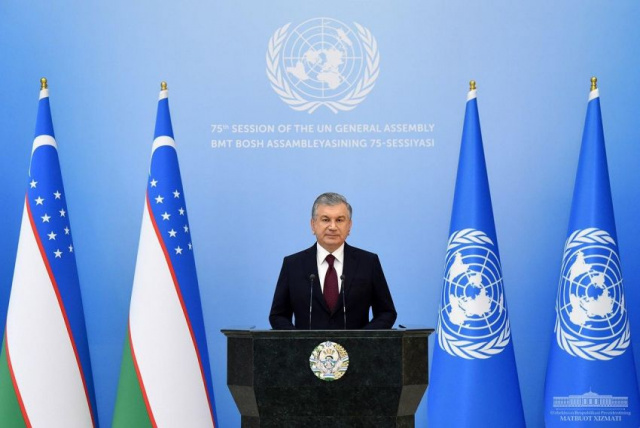 The seventy-fifth session of the General Assembly is being held for the first time in the history of the United Nations in a completely new format – an online videoconferencing due to the coronavirus pandemic.

Such a global catastrophe has not been observed on our planet in the last hundred years.

The current threatening and complex situation has proved that all states and peoples of the world are interconnected and that regular dialogue, trust and close cooperation among us are extremely important.

In this context, all of us have deeply realized the need for consolidating the mutual efforts of governments, parliaments, civil society institutions; strengthening the principles of common responsibility; coordinating international partnership accordingly; increasing the status and capacity, as well as expanding the competences of the World Health Organization.

Our goal is to jointly create fair global system that ensures basic rights, freedoms, health and well-being of every human being.

In this regard, we propose to develop under the UN auspices an International Code of Voluntary Commitments of States during pandemics. This document should reflect each state’s commitments to its citizens and international partners.

Since the early days of the COVID-19 outbreak in Uzbekistan, we have focused all our efforts and resources to containing this dangerous disease and, most importantly, saving the people’s lives.

Social protection and health systems are being cardinally strengthened to mitigate the negative effects of the pandemic; targeted support is provided to the population, sectors of the economy and businesses. Special funds have been set up to this end.

I would like to take this opportunity to express my deep gratitude to all our friends and partners who have generously supported during this time of trials.

We fully support the international community’s all efforts to effectively combat the pandemic, including the development and widespread use of essential drugs and vaccines.

We also welcome the proposal of Secretary-General António Guterres to hold a summit on the pressing issues of food security in the current context of the crisis.

Dear participants of the General Assembly!

Three years ago, speaking from the high rostrum of the United Nations, I stated that Uzbekistan was firmly determined to implement radical reforms.

As a result of our large-scale measures on political, social and economic modernization of society, a new Uzbekistan is being formed. Today, the process of democratic transformations in our country has become irreversible.

Last year’s parliamentary elections demonstrated the growing political activism of the population and parties, the role of civil society institutions and the influence of the media.

The gender equality policy became a priority for us. The role of women in public administration is growing. In our new Parliament the number of women deputies has doubled.

The human rights situation has also completely changed. The forced and child labour were fully abolished. The National Human Rights Strategy was adopted.

In response to a call from the United Nations to reduce the number of stateless persons, this year alone 50,000 of our compatriots were granted Uzbek citizenship.

The situation with religious freedom in our country has also improved dramatically. Further strengthening the inter-ethnic harmony and inter-religious tolerance is a constant important task for us.

Comprehensive reforms to ensure true independence of the judiciary and the rule of law are being consistently implemented.

The uncompromising fight against corruption has reached a new level. In this regard, important legislation has been adopted and independent Anti-Corruption Agency was established.

The economic reforms are being dynamically continued in our country. For the first time, we have publicly declared our determination to reduce poverty. We are achieving this through development of entrepreneurship and job creation; improving the investment climate and business environment; building a modern infrastructure and providing targeted social assistance to the population through training people to new professions.

In our country, where over half of the population is young, an extensive work is underway to ensure that every young person takes a worthy place in society and demonstrate their potential. The Youth Parliaments and the Agency for Youth Affairs are operating in Uzbekistan.

In August the Samarkand International Forum on Youth Rights was successfully held under the auspices of the United Nations.

I would like to take this opportunity to once again call on you to support Uzbekistan’s initiative to adopt the United Nations Convention on the Rights of the Youth.

In addition, we propose to adopt a special resolution of the United Nations General Assembly on enhancing the role of parliaments in achieving the Sustainable Development Goals and ensuring human rights.

The fundamental changes are taking place now in the region of Central Asia. We have managed to create an atmosphere of good neighbourliness, mutual trust, friendship and mutual respect among the states of the region.

Our common achievement is consultative summits of the Central Asian Heads of State, which was put forth as an initiative at the 72nd session of the United Nations General Assembly and has been regularly held since then.

Over the past four years, Uzbekistan’s bilateral trade with neighbouring states has grown almost five-fold.

During these days of trial our countries are standing by and not leaving one another alone.

Today, the Central Asian states face an important strategic task. This is to ensure deep integration of our region into the global economic, transport and transit corridors.

In this regard, we propose to establish a Regional Centre for the Development of Transport and Communications under the auspices of the United Nations.

Today, the effective security cooperation is maintained in Central Asia. The United Nations Global Anti-Terrorism Strategy is being successfully implemented.

We stand up for conducting the International conference on the ten-year results and forthcoming prospects of this Joint Plan of the Regional Strategy.

As it is well-known, the ancient cultural and rich spiritual heritage of our region is of global importance. We are ready to hold the International Forum “Central Asia at the Crossroads of World Civilizations” in the ancient city of Khiva in 2021 in cooperation with UNESCO.

Dear participants of the session!

We see Afghanistan as an integral part of Central Asia. The Tashkent High-Level Conference on Afghanistan in March 2018 marked a new stage in the mobilization of the international community’s efforts to resolve the Afghan problem.

We fully support the peace talks among the Afghan political forces launched this year in the city of Doha in September. We express hope that these talks will serve for bringing in peace and stability in the long-suffering land of Afghanistan.

In order to broadly involve Afghanistan in the process of economic integration in the region, we have started the implementation of major infrastructure projects such as “Surkhan – Puli Khumri” power line and construction of a railway from Mazar-i-Sharif to the sea ports of the Indian Ocean.

We believe that the issues of ensuring peace and stability in Afghanistan must remain a constant focus of the United Nations.

Only together and through close cooperation we can realize all the dreams and aspirations of the Afghan people. In this regard, it is important to work on the principle of “From instability and destruction – to peace and prosperity”. To this end, we propose to establish a permanent UN commission on Afghanistan that would address the concerns of long-suffering Afghan people. The main task of this Commission must be to promote and facilitate the economic and social development of Afghanistan.

Distinguished Heads of State and Government!

Another acute problem of our time is related to global climate change. Today, every country feels the negative effects of this process. Unfortunately, such negative developments also pose a great threat to the sustainable development of Central Asia.

I would like to once again draw your attention to the devastating effects of the drying up of the Aral Sea. The Aral Sea region became the centre of an environmental tragedy. To mitigate the current situation, we are carrying out an enormous work to create two million hectares of new plantations and forests, to form a layer of soil.

On our country’s initiative, the United Nations Multi-Partner Human Security Trust Fund for the Aral Sea Region was established.

We hope that this Fund will serve as a base platform for the international community to provide practical assistance to the population living in a stressed ecological zone.

We propose to adopt a special resolution of the UN General Assembly declaring the Aral Sea region an area of ecological innovation and technologies. It would be expedient to mark the date of adoption of this important document as the International Day for the Protection and Restoration of Ecosystems.

In conclusion, I would like to emphasize yet another point: the continuing unrest in various parts of the world, the growing conflict and violence, environmental disasters and other modern threats are exacerbating the global problems of misery and poverty.

These problems become especially acute in the condition of pandemic. The voice of poverty, which is getting even more alarming today, must raise concerns in entire world community and all of us.

In this regard, we propose to set the issues of poverty eradication and the fight against poverty as one of the main topics of the next session of the United Nations General Assembly and hold a Global Summit on these issues.

It is clear to all of us that the socio-economic landscape of the post-pandemic world will be completely different.

We need to work on the basis of new approaches and close cooperation against common threats to security and sustainable development.

The central role of the United Nations as a coordinating international structure needs to be further strengthened.

Uzbekistan always stands ready to develop a wide-ranging and mutually beneficial partnership with all countries of the world, as well as practical dialogue with the United Nations and its institutions.

Thank you for your attention.